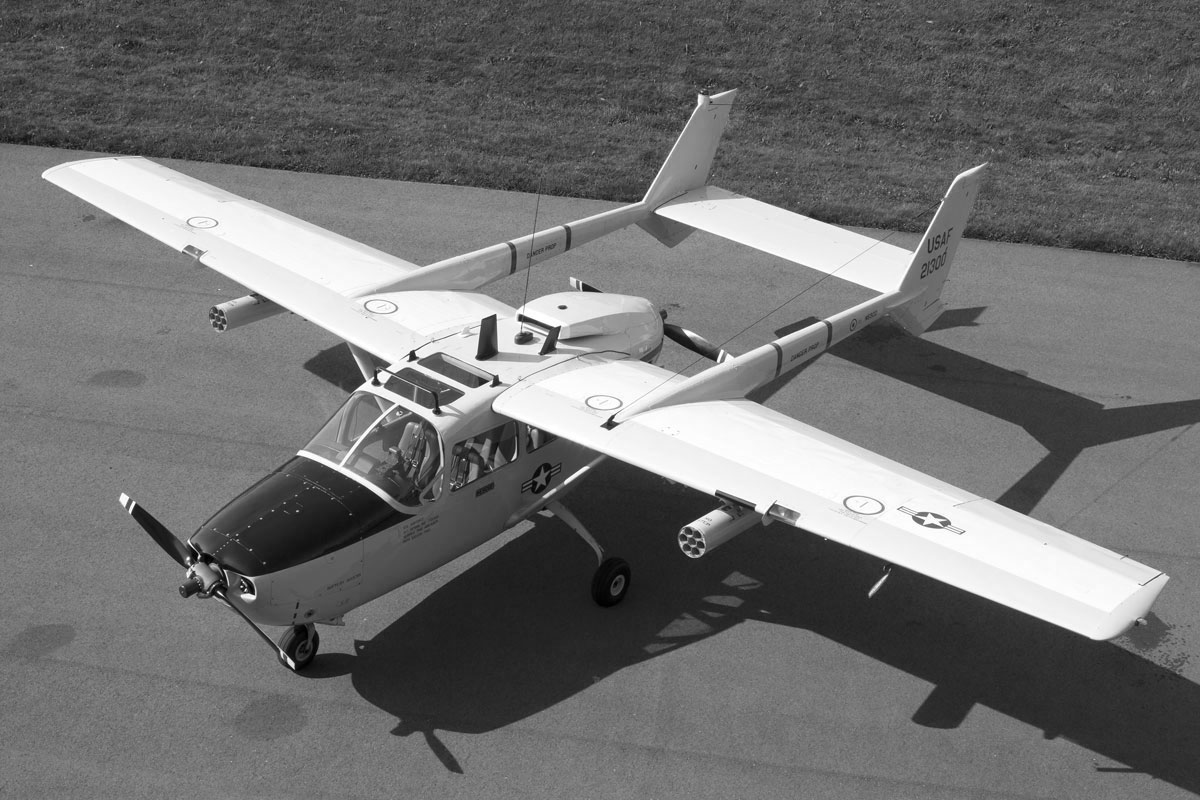 The Cessna O-2A origined in the midst of the Vietnam conflict, when the American forced needed a reliable and rugged platform for Forward Air Control - finding and marking targets for the high- and fastflying bombers.The OV-10 Bronco was selected for this mission, but its manufacturer could not cope with the demand. Between 1967 and 1970 Cessna produced over five hunderd O-2's.

Our aircraft (registered N590D) was built in 1967 as the 6th O-2A to come off the line, and served for three years in Vietnam. After that she was flown back to the US, where she served until well into the 80's. She was when sold into civil hands. In the early 2000's the worn down airframe was fullye restored to its original military state in Camarillo, California.

N590D came to the Netherlands by initiative of Jeff Bakker and Erik Brouwer. An interview with both men lead to reactions from the Dutch aviation community, and finally to one Dutch party purchasing the O-2A. Chairman Jeff Bakker participated in the ferry flight across the Atlantic. You can read his report here. (Dutch)

The Postbellum Foundation is always looking for enthousiastic participants, who are willing to contribute to our foundation in whatever way possible. Would you like to fly to airshows with the O-2A, this is possible. You do need the following licences for that.

(the conversion is needed to fly outside Dutch borders)

-300 flying hours on a Cessna or any comparable type

You will then have to pass a proficiency course on the Cessna O-2A, wherein an independent examiner/instructor will familiarize you with the aircraft. To prepare for this, you can download the manual here:

Overshadowing both Fokkers and Spitfires, F16's and Joint Strike Fighters, there is no aircraft in Dutch military aviation history which speaks to imagination like the Lockheed F104G Starfighter. The Missile with the Man in it was ordered under shady political circumstances, and until today is subject of both admiration and debate.

What did we Dutch guys have to do with a jet that could not even make a '360' at full speed above our own country? 'Bringing nukes to the Russians' was what the military told us. And that is what they did, although they were mostly wood and concrete dummies.

But would it have been necessary, we could have done it. Because the Starfighter was perfectly capable of flying extremely fast in one direction. And as such it was a success, because the Russians never came. It is hard to find a better example of the I-hit-you-if-you-hit-me game that was played during the Cold War.

No wonder the Postbellum Foundation is happy to have such an icon under its roof. The aircraft based in our hangar once flew in markings of the German Luftwaffe (24+46), but is now restored as D-8060 of the RNLAF.